Iron is one of the most abundant elements on earth, and iron oxide makes an excellent grinding media. If you have a precision piece of machinery like a bearing that’s also magnetic, you create a situation in which it can grind itself away. Also, as the bearing wears away, the resultant product is itself a grinding media multiplying the problem. Having a bearing that attracts a grinding medium is not a good thing.

There is not much material published on this topic; however, suggested that a measurement of no more than two gauss – magnetic flux density measurement unit – should be measured in the bearing area of the shaft.

For a typical maintenance department, such an instrument to measure gauss is not common. However, there is a clear recognition that whatever manufacturing processes there are for a bearing that will be mounted on a shaft, there must be some way of both measuring and eliminating magnetism that may be created by that process.

Another cause of magnetism is an induction heater, a common tool in shops that install bearings. The device creates an electric field that heats the bearing (like a kitchen induction oven), but it also causes magnetism in the bearing. More sophisticated induction heaters should be preferred that have an automatic demagnetization cycle (demag cycle). 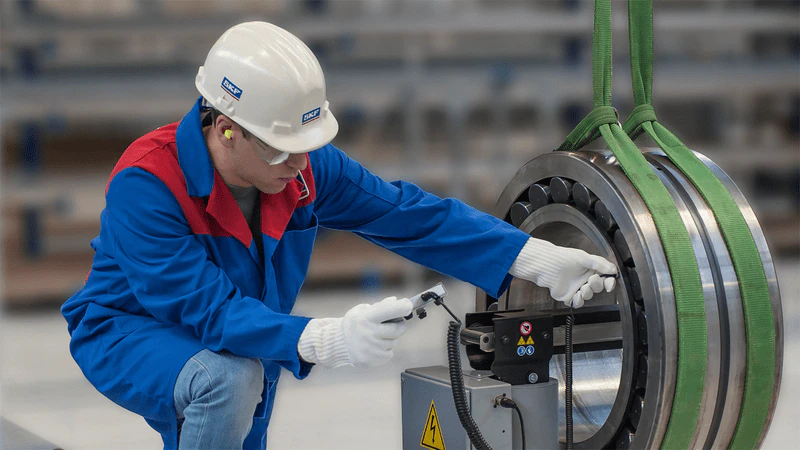 For induction heaters with demag cycles, the stated “norm” is that the magnetism must be below two ampere/centimetre (A/cm) (of interest, one A/cm, is about 0.000126 Tesla and one Tesla is 10,000 Gauss). These higher-grade induction heaters ensure that they do not leave the bearing with magnetism, and thus unintentionally shorten its life.

Having a bearing that has become magnetic can be detrimental to its operation. The sources of magnetism in the bearing manufacturing process are well understood and closely controlled. Therefore, the likelihood of a new bearing being magnetic from the package is highly unlikely. However, further handling of the bearing, such as using an induction heater without a demag cycle, or having the shaft itself become magnetic from its manufacturing process, can induce detrimental magnetism in the bearing.

Every month we send two emails with useful information about the industry and maintenance. Sign up: